Give
Get in touch
Menu 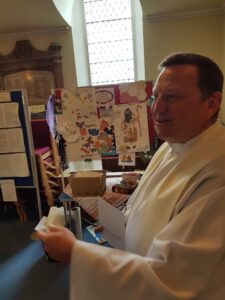 James left school at 15 and got an apprenticeship to become a tool maker with Donald Edwards Engineering Ltd. This was at a time when engineering in Gloucester was the main employer for the people of Gloucester from making train engines and carriages at Wagon Works to blades for Spitfire or parts for Concorde and F1 Grand Prix cars at Permali. He moved from the shop floor to working in a drawing room as “he valued his fingers….” He played and still plays keyboard in a group called Free Fall (More later)

But he lived through, witnessed and personally experienced the gradual decline of engineering in the 1990’s as the main employer for Gloucester people and the impact that decline had on the city, the local economy and local communities. Like many he can understand what it is to be made redundant or work in a company that is struggling and experience jobs and pay cuts.

But that experience was and is valuable in how he expresses his faith- how he relates and can listen to people who live ordinary lives and what that experience taught him and maybe what people are going through now.

He can thank Sarah, his wife, for what brought him to God and to later become a clergyman. In the early time of their courtship Sarah invited James to Sunday lunch with her parents but she did point out one condition: he would have to go to church with her family at St Barnabas. He did think at the time “this was a bit weird” He thereafter attended church  off and on but in those days Sarah was the attraction, not God. He loved the Sunday lunch of Sarah’s mum but also the welcoming of the people at St Barnabas- something he has never forgotten- and…… he was intrigued.

When they got engaged, he felt he should be baptised so in one weekend- on the Saturday evening he was baptised and on the Sunday morning he was confirmed together with an 80 year old called Eric -who later became a Chelsea Pensioner.

A few months later he did an Alpha course that “blew my mind”. After the course he felt God was a very real presence in his life. James didn’t have all the answers, but he felt that the evidence suggested that  God was willing to accept him, So James accepted God into his life… and life has never been the same again!

Ordination happened in 2017 and he was a self-supporting curate at Upton St Leonards whilst continuing to work in the drawing/design room for the engineering company , Eroga Ltd, in Gloucester. He had to study for a theology degree and he had a young family. As an ordained priest- preaching and leading worship on Sunday and then on the Monday designing at Eroga LTD – that experience of continuing to work taught him to understand in small ordinary ways, how God works in the world and is involved in everyday life.  As an ordained man in the workplace James says he spent a lot of time  listening and trying to understand the everyday challenges and anxieties of people as engineering went into decline.

As the new Team Vicar in Stroud James now holds a full-time ministry position within the team. Adjusting to this has been a challenge as the working day is so different from when James was working full-time in engineering. On his first Sunday with us James had a particularly busy, but enjoyable day. Once home he says he was tired, but also encouraged and uplifted by the welcome he had received from the communities he had visited. James said how he feels at home in Stroud and is looking forward to the future as the Team Vicar in the Stroud Team Ministry. 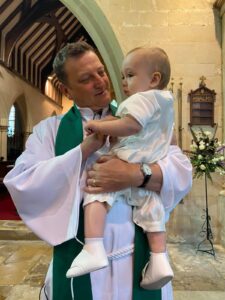 As a Manchester United fan (Editor note: sadly) he was delighted that Madrid beat Liverpool in the Champions Final. He listens to electronic pop music such as Kraftwerk, Tangerine Dream or Depeche Mode.

His two claims to fame are: his band is now  called Free Fall, but they were once  called Anastasia. They  had had a couple of albums released but then received a letter from EMI telling them that due to copyright they had to change the name of the band because of the American solo singer Anastacia!

And secondly he went to a gig in Gloucester and the singer/songwriter, Ed Tempole Tudor was appearing. It was a small, intimate kind of gig, and the  backing band hadn’t turned up so James did the backing music for a couple of numbers. Who is Ed Tenpole Tudor? He was once considered as a possible replacement for Jony Rotten  in the Sex Pistols, he scored a major hit  with a song called Swords of a Thousand Men in 1981,  but found further fame as the presenter of The Crystal Maze on Channel 4.

What’s new for the book group

Great moments with great artists at our Sacred Music Festival

We welcome Joey into the fellowship of faith

Our safeguarding team can be contacted on this email address: [email protected]

Any and all technical enquiries should be directed to
the webmaster

Site and Marketing by Orange and Blue

We use cookies on our website to give you the most relevant experience by remembering your preferences and repeat visits. By clicking “Accept All”, you consent to the use of ALL the cookies. However, you may visit "Cookie Settings" to provide a controlled consent.
Cookie SettingsAccept All
Manage consent

This website uses cookies to improve your experience while you navigate through the website. Out of these, the cookies that are categorized as necessary are stored on your browser as they are essential for the working of basic functionalities of the website. We also use third-party cookies that help us analyze and understand how you use this website. These cookies will be stored in your browser only with your consent. You also have the option to opt-out of these cookies. But opting out of some of these cookies may affect your browsing experience.
Necessary Always Enabled
Necessary cookies are absolutely essential for the website to function properly. These cookies ensure basic functionalities and security features of the website, anonymously.
Functional
Functional cookies help to perform certain functionalities like sharing the content of the website on social media platforms, collect feedbacks, and other third-party features.
Performance
Performance cookies are used to understand and analyze the key performance indexes of the website which helps in delivering a better user experience for the visitors.
Analytics
Analytical cookies are used to understand how visitors interact with the website. These cookies help provide information on metrics the number of visitors, bounce rate, traffic source, etc.
Advertisement
Advertisement cookies are used to provide visitors with relevant ads and marketing campaigns. These cookies track visitors across websites and collect information to provide customized ads.
Others
Other uncategorized cookies are those that are being analyzed and have not been classified into a category as yet.
SAVE & ACCEPT

If you would prefer to ring in

On a desktop computer

In order for this to work you will need a computer with at least a microphone and speakers. You do not have to have camera, but obviously it helps.

You may need to grant permission to use your camera and microphone.

We will get a notification that someone wants to join the call and we’ll let you in.

On an iPhone or Android

Download the app Google Meet first. Open the app and give it the permissions it needs to access your camera and microphone.

Then come back and click the Ding Dong! button on this page.

Communion during this time

In these unprecedented times, we are working hard to find imaginative solutions in a landscape that has been rapidly changing. Sometimes we get things right, and sometimes we miss the mark. I apologise that this has been the case regarding communion.

For those of you who have received wafers in a parcel, we would ask that you either consume them, or put them somewhere safe to bring back once we are able to be together again.

We are going to be sending out a new order of service for use during this time as either a simple service of the word or, on occasion, to help us to share an Agape meal together.

I Have Spotted an Error on the Team Calendar